A400 page book of radio talks, public lecture notes, journalism and reviews by a don whose star first rose in the1950s doesn't on the face of it sound either very entertaining or relevant, and yet it is both.

Bernard Williams; Essays and Reviews 1959-2002 (University Press Group, January 2014) charts the intellectual progress of a man who was raised to the position of Knightsbridge professor of philosophy at Cambridge at the age of 37 on the basis of promise, and, having read the collection it is not difficult to see why. Three aspects of his thought and writing stand out. 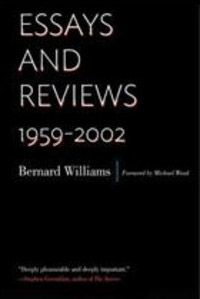 First, the jargon-free language he uses. Williams' beliefs on the subject are strong. In his review of B. F. Skinner's Beyond Freedom & Dignity he remarks that the book's "Jaunty jargon is so removed from any social reality that it could scarcely produce, directly at least, much evil in practice". In an age of puffery the philosopher insists "There has to be a difference between what things are like if x is true and what things are like if x is not". And this understanding plays out in his own prose which deftly navigates the reader around complex problems.

Second is the humour. Wherever pomposity, humbug or abstraction inflates or detracts from the debate, Williams employs wit to prick the bubble and bring the focus back on to the matter at hand. I found it surprising how many times Williams, beneath the spiky jokes, uncovered some very poorly-formed arguments. Lucien Goldmann's book on Kant for instance claims reification is closely asssociated with the "modern bourgeois individualist order", prompting Williams to remind the author that "The most notable example of this type of thought was Plato, who was not modern, nor bourgeois, nor confronted with a stock market".

Third, the confidence Williams displays in his own judgement is incredible (and often justified). Few authors are spared the lash of his tongue. George Edward Moore produced "a collection of materials rather than a book", the "bulk" of Bertrand Russell's work was "unfruitfully archaic", Christopher Lasch's book onWherever pomposity, humbug or
abstraction inflates or detracts from
the debate, Williams employs wit to
prick the bubble narcissistic culture is little more than a "Jeremiad", Iris Murdoch's offering on Plato and artists contains "barely intelligible references", Gilbert Ryle's late style was "mannered, empty and unconvincing". Umberto Eco comes off especially badly when he talks of  "the typical pattern of Western rationalism, the modus ponens". Which Williams answers with another question: "How far east do you have to go for that to stop being valid?"

The greatest victim of the curt, arch and tart Williams is perhaps paradoxically the thinker most known for these attributes, Maurice Cowling. Williams is the master of that very British device: the courteous backhand, also known as the sentence you have to re-read to fully appreciate the sting in the tail. A good example is when he reminds the reader that "if all religion offers is [he lists conservative concepts] then one [i.e. Cowling] needs some extra agency to keep one from immediate and close association with the more unreconstructed sort of cardinal."

He then attacks the hypocrisy of Cowling whose reputation as a ruthless critic of complacency seems unaffected by the fact he used the "dusty hassocks of an older Anglicanism" as a crutch. The attack never descends into any sort of rebarbative Philippic however because Williams has a serious point. How can Cowling "if all historical truth is relative" have a leg to stand on when he complains about liberalism?

This is characteristic of all the essays. Beneath the trenchant tone is a plangent discernment that is very rare. Williams can see the deeper music that provokes the questions and ideas in the authors before he bothers to detect faulty logic in their application.

On a personal level Williams seems to stand with Nietzsche in reckoning that the will-to-truth has "become conscious of itself as a problem" and that morality (or at least the morality we have always known The confidence Williams displays in
his own judgment is incredible this civilisation) will gradually begin to perish, especially as self-consciousness increases. He believes the highest hope we have invested in philosophy, namely, a wish for the highest rationality to deliver transcendence, has ultimately trapped the current academic forms of philosophy in an "unhelpful, boring and sterile" place, but that we will always need philosophy because scientists cannot justify their claim to be useful "simply by doing science - they have to do philosophy".

One undoubtedly comes away from Williams with the intellectual armoury restocked and the will-to-truth reinvigorated, but one does not exit the teacher's study with a great sense of what the thinker was for on a shallower, political level. Perhaps this is Williams' prerogative as a philosopher but it has marooned those who want more . It has caused

Mary Beard to fall back on calling him a "tall, angular, paternalistic male" and Roger Scruton to suppose he might be a "minimalist" and a "snob".

These criticisms fall flat not because they are necessarily incorrect but because Williams, at least in this book, exposes very little flesh to throw mud at. He ultimately feels like a giant Occam-razor to the cant of the twentieth century; a liberal counterweight to that other great Classicist, the American Leo Strauss, who tried to restore the ancient conception of Man's vocation in philosophy and politics, a conception which Williams is fond of puncturing.