HomeThe Emergence of the English by Susan Oosthuizen

The Emergence of the English by Susan Oosthuizen

I tend to approach books like this with either a degree of trepidation or resignation. As a Welshman, I have had a lifetime of smiling politely at stories of Anglo-Saxon exceptionalism or nodding fixedly at the idea of Dark Age Manifest Destiny, where the Anglo-Saxons brought civilisation and Christianity to a barbarous people, pointing out that both existed before attracting either derision or denial. The main argument of how post-Roman Britain became Anglo-Saxon England – Abandonment, Assimilation or Annihilation – gets ignored in favour of Attribute; natural superiority carries all before it, history after all is written by the victors. The one thing the Welsh are never forgiven for is being here first; even their name (‘the strangers‘) is an attempt to marginalise them.

So, what did I make of Professor Oosthuizen’s book? The initial shock is its size; at less than 150pp I was expecting a brief polemic, and read on with an increasing degree of astonishment at the breadth of knowledge and the depth of research it contained, marshalling arguments for and against the traditional views of a radically changed social, political and economic post-Roman landscape.

As with so much else it starts with the naming of things. The Dark Ages has been a troubling term for so long, as archaeology has started to fill in the absence of documentary evidence (thanks to motorways and the invaluable work of the detectorists amongst others), and the closing of some huge gaps and has left it as something of a misnomer. She briskly recategorises the period (400-600 is late antique, 600-850 becomes early medieval and 850-1066 as pre-Conquest), a logical dovetailing that fits in with broader European history before jumping straight into primary source material.

I never liked Gildas and Nennius, those proto-nonconformist Methodist preachers, fulminating against local rulers while smugly refusing to sanction practical alternatives. Bede I dislike as he fits into Lenin’s definition of a useful idiot, providing a Year Zero view of Anglo-Saxon history that has enabled generations of schoolchildren to ignore what happened between 475 and 730, desperately trying to airbrush over events like the Council of Whitby. They are quickly dealt with as guides rather than accurate sources.

Genetic research has replaced the troubling concept of race with its highly charged overtones. Advances in genomic research have shown problems in the data modelling used, specifically the re-evaluation of whether ancient population history can be identified from modern genomes. For example, despite the perception of Iceland as a homogenous society, less than 50% of the DNA in ninth-century Viking burials is represented in the modern population. That means if you were to reconstruct the Viking population from modern DNA, half of them would be missing from the result, so trying to track back into Celtic or Germanic population clusters can be difficult and working forward from graveyards of the period doesn’t provide as wide a pool of material as is required to be definitive.

Ethnicity, the collective social identities characterised by specific cultural traits, is explored and it's shown to be difficult to prove how Germanic culture swamped the Romano-British population by the witty example of Ikea (it’s worth buying the book for that illustration alone). The gens, nations and populi of late antiquity would be better characterised as communities of one sort or another rather than the people of a nation. Look at modern society with our variety of allegiances – professional, personal, religious, social, regional, sporting, Brexit, etc – but what language did they speak? A degree of multi-lingualism was present in the Romano-British population: variations of Brittonic, Latin, etc, so why did spoken Old English become so prevalent when Brittonic place names remain so common (the location of the Battle of Badon is known to anyone with a little Welsh after all) and personal names like Cerdic and Cynric, the founders of Wessex, and Aedelwealh of Sussex have Brittonic names? Colonial transmission, elite replacement or the deliberate construction of a hybrid political identity where new dynasties encouraged foundation myths in a ‘consciously structured narrative sufficient to bind entire communities together’? I personally think that with the replacement of Mediterranean goods by those of northern Europe, the innate tendencies of my people to fit in, get on and find someone to look down on came to the fore as they adopted wholesale the new culture and goods they were exposed to.

Most of the island’s population – those dependent on agriculture and descended from its earlier inhabitants – continued to exploit the same landscapes in much the same ways as their ancestors had done (Wharram Percy being the prime example I can think of). Professor Oosthuizen has laid out a land whose history is one of continual occupation except in areas of radical short-term change. She uses a change model to show small, intermediate or large-scale changes over what Braudel defined as the longue durée, one I don’t want to go into as it would give too much away and I intend on using it myself before everyone else. In her own words though, the history of this period showed peoples who ‘expressed collective identities drawn from the landscapes they occupied, and among whom continuity may have been as commonplace as transformation’.

While there may have been some Abandonment (political and economic collapse, the Justinianic Plague), there is no evidence for Annihilation (a population conservatively estimated at 3 million did not disappear into mass graves). That leaves Assimilation, which confirms what every Welshman suspects deep down: that the English are just Celts pretending to be Germans in the world’s earliest example of Stockholm Syndrome.

So if you’re reading this, greetings Boyo, you’re probably a long-lost cousin of mine.

The only troubling thing that skirts around my head now is: who are the Welsh? 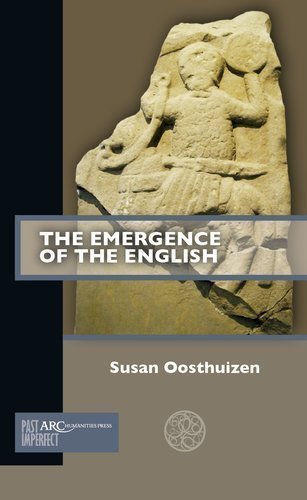