Does the author know he is producing agitprop or not? Henry Hopwood Phillips reviews The Establishment by Owen Jones.

In The Establishment (Allen Lane, September 2014) Owen Jones offers his thoughts on those who rule us. He doesn't define our puppet - masters, mostly because according to his definition it's not who they are that is fixed, it's a reciprocal system: people buy into it so that it buys into them. 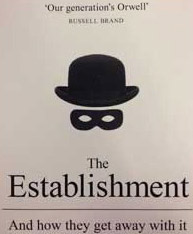 Warning bells go off when Jones notes that anybody to the right of Lenin that challenges the system (so everybody then, apart from Jones) are not radicals at all but agents of the establishment on steroids, whose criticisms (for example of immigration) basically feed and reinforce a false - consciousness. It's a convenient concept historically used by Marxists to deny the real working people, as opposed to the abstract liberator class, their voice. Jones must apply it to the majority of the British people if he is not to deny research later included in the book, which demonstrates that the British electorate is, for the most part, more socially conservative and economically interventionist than its light - touch socially liberal elite.

As the book rumbles on it becomes clear that Jones, despite his quibbles about democracy, identifies far more with the light - touch socially liberal elite than he might like to admit. He plays the outcast well but his protestations, like many an emperor assuming the purple, ring hollow. One only has to read the list of names in the acknowledgements (David Blanchflower, Mehdi Hasan, Eric Hobsbawm and Geoffrey Robertson just to give a few) to realise that Jones, at 30, has had ample space and time for wide reading. This is not a man who has had to 'earn a crust' as he might say. If Jones is not a major component of the establishment, he is certainly a part of it in much the same way that Her Majesty's Opposition is a part of the governance of the realm.

I would guess that Jones knows that whistle - blowing within the circus of power is a very monetisable role, and one that is, more importantly, not incompatible with being a member - in fact it gives him a patina of rebelliousness - a shroud the establishment loves to cover itself in, like a dog in fox poo, to cover its real scent. 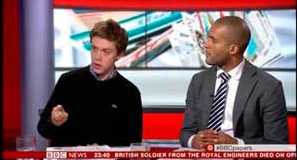 The real question that haunts the book is whether the author knows he is producing agitprop or not. Jones went to Oxford and yet has set up an intellectual playing field so tilted that a goat would dismiss it as impassable. It's not as if the tricks employed are new or clever either.

Instead, Jones' criticisms of capitalism display the simplistic and monolithic tendencies he would doubtless abhor in the analysis of one of his own interest groups. One of his favourite techniques is to characterise He plays the outcast well but his
protestations, like many an emperor
assuming the purple, ring hollow pro - capitalists as idiots with no principles, merely interests, and then, when it suits him to admit to their ideals and cast them as "true believers, zealots even". His definition of reactionary hinges on "the aim to turn the clock back" - a risky line of attack for a Marxist. He insists on calling libertarian think tanks "outriders" with a view to making them sound like prejudiced cowboy salesmen. And he knows the BBC is a right - wing mouthpiece because people like Chris Patten work there.

Perhaps the most interesting part of the book is the section Jones devotes to the Madsen Pirie mission and how it ensured free markets offered answers at a time when the postwar economic consensus had stalled. It is a shame that, again, the language used makes the movement sound like some sort of evil counter­ - reformation. To Jones and his ilk it is clearly what the Frankfurt School theory is to the right: a helpful explanation as to how the heretics got into the citadel. 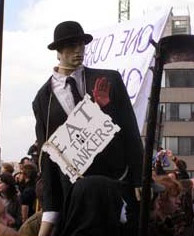 There are many valid questions that could have been asked from Jones' starting - points. He had the opportunity to shine his torch down some of the darkest folds of the Western mind. He could have, for instance, investigated whether capitalism in its advanced stages is compatible with democracy or, on a less abstract level, looked into the psychology of the elites who persuade themselves that they are part of no orthodoxy. Instead, we get a jumble of chapters, with not enough distance or analysis to be considered history but too much of both to be reckoned journalism. Each topic, from policing to media, feels like a hook to hang a range of grievances on that lazily imply conspiracy.

The result is a rather sulky immature text that sags with references to the Murdoch - owned The Times' -  a formulation he repeats throughout like a toddler in love with his own revelation.

Any sense of outrage that I felt could have been kindled (as a writer I have many reasons to dislike capitalism, not least my bank balance) is repeatedly dulled by a grasp of the facts that leaves one mistrustful. Readers will be stunned to hear for instance that "ideologically conservatives have no doubts about capitalism". Red Tories, Ruskinites, Chesterton types, fascists and Roger Scruton would beg to differ.

The real tragedy is that the book does have ajustifiable target. Both the elite and the society it brings about Jones has set up an intellectual
playing field so tilted that a goat
would dismiss it as impassable often lack a democratic mandate but this is a phenomenon better coveredin Peter Oborne's The Triumph of the Political Class (2008). Capitalism, too, in the West at least, has become distorted to the point that it barely serves its own narrow ends, but again this is a problem better addressed by Daniel Pinto in Capital Wars (2014).

In going for the bigger picture, Jones has fallen between many stools. But worse than this, his glaring omission of the left's marriage of convenience with capitalism makes for a lopsided read. Capitalism was once yoked to many a cultural end but the left assaulted these values and rejected them all as 'oppressive'. Truth can no longer stand up as a defender of the weak against the power and promiscuousness of money because the left taught us long ago that truth was merely the glove worn by power's fist. If Jones is serious about rescuing us from the tyranny of anomie, he needs to think seriously about Nietzsche, not his own friends.