Henry Hopwood Phillips asks—what was it about the Gothic style which so obsessed John Ruskin?

Ruskin believed morality and beauty were fused. In his eyes both shared an orbit and the Renaissance disrupted it. Striving for truth to be exalted in art at a time when beauty per se was becoming pre-eminent in the Aesthetic Movement, he urged an emergency reassessment.

Raised on a diet of the gospel, trips to the Alps and the paintings of Turner, Ruskin most valued the artist that proved capable of unlocking a sense of revelation. Of Turner he wrote: “Detail after detail, thought beyond thought, you find and feel... through the radiant mystery... secret in fullness, confused in symmetry... through [it all], the perpetual newness of the infinite, and the beautiful”.

It was this religious feeling, a “negative capability” underpinned by Christianity, that formed the keystone of his future theories and unique appraisals. Take gothic cathedrals. Ruskin believed these were beautiful because their craftsmen were men at play rather than tools executing models; men whose imagination was unlocked by a Christianity that exhorted them to “do what you can, and confess frankly what you are unable to do; neither let your effort be shortened for fear of failure, nor your confession be silenced for fear of shame”. It was a sentiment that fed into Ruskin’s belief that “changes come into [an artist’s] head involuntarily; [in] an entirely imperative dream crying ‘es muss sein!’”

This put Ruskin at odds with the art establishment of his time. It preferred to sponsor more measured neo-classicist masters such as Canaletto, Poussin and Claude. Setting the tone, Reynolds, writing his fourth discourse of 1771 wrote that it was indisputable that Claude’s practice “is to be adopted by landschape [sic] painters”.

Ruskin disliked the movement’s non-religious and tepid idealism. After viewing Claude’s Mill he commented, “I do not remember ever having met with either a city or a fortress entirely composed of Ruskin believed morality and beauty
were fusedround towers of various heights and sizes, all facsimiles of each other, and absolutely agreeing in the number of battlements”. He believed that the neoclassical jamboree was a classic case of the squinting leading the squinting. It corrupted nature and reality by excessive idealisation of both human forms and campagnas, thus exaggerating and deforming beauty rather than improving it.

For our impressively side-burned critic art was less about process than heart. His formula was quite simple. Beauty was grounded in meaning and meaning was rooted in nature: the “forms are not beautiful because they are copied from nature; only it is out of the power of man to conceive beauty without her aid”. And part of respecting nature was keeping “Art [as] the expression of Man’s joy in his labour” at a time that society was in the process of robbing Man of the joy.

Ruskin believed the new system placated the obvious evil at play against the worker by allotting him weekends and a welfare system to fall back on, but this meant not only stealing from the worker of a sense of vocation but also of a true sense of leisure (which should have a certain sense of timelessness about it). The thinker insisted work was part of life, not something to be endured in anticipation for the weekend—a Faustian bargain, a form of self-deception and escapism perfectly encapsulated by Georges Seurat’s Bathers. 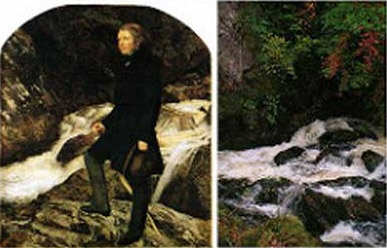 Ruskin observed that the apparent cleavage between beauty and morality was traceable to the Victorian idea that utility and beauty were at odds with one another. He would certainly have agreed with G. MacDonald’s rhetorical question: “is not a diamond that flashes all its colours into the heart of a poet as useful as the diamond with which the glazier divides the sheets of glass into panes for our windows?”

To see the greatest art, Ruskin insisted, was to see clearly “poetry, prophecy and religion - all in one”. The two Hebrew values, lacking in an age that excessively honoured the classics were to be found in a rehabilitated Middle Ages—previously dismissed as a fire exit from the Dark Ages.

The reclamation of the Gothic was therefore central to Ruskin’s mission. Its style was rarely abstract or Beauty was grounded in meaning and
meaning was rooted in nature idealised but almost always particular. If its buildings honoured the laws of the
physical world, expressing the natural characteristics of the materials they were built, this was because they were “celebrating the beauty of natural forms by invoking them in its own formal dispositions—in rose windows, in foliated tracery”.

Conversely, the Renaissance, often perceived as the front door to enlightenment, Ruskin reinterpreted as an over-confident movement preferring “smooth minuteness” to “shattered
majesty”, ridding architecture, and implicitly society, of the imperfect man as God had created him, aspiring in his “Christian” freedom to do his best to interpret the divine and instead brought in “creatures” as tools aspiring less to God than geometrical absolutes.

This dramatic reshuffling of the cards might strike the reader as a little too “romanticised”, however, there is undoubtedly truth in W. Morris’ remark that “Romance is the capacity for a true conception of history, a power of making the past part of the present”.

Tolstoy praised Ruskin when he noted that he was “one of those rare men who thinks with their hearts”. Unfortunately, after a series of events, including a misconceived marriage and unpleasant divorce, the death of his beloved Rose La Touche, his defeat in the Whistler case, and a dark fear that his ideas concerning beauty and truth were failing to have an impact on the public, his mind, wherever it was, broke down.

The recluse fell prey to an illness, which perhaps he came close to describing when he said: “[the imagination is a] noble faculty so long as it confesses its own ideality”. His final years are much speculated upon but my own view is that, no longer able to endure the difference between his ideals and reality, he went insane. But he was wrong in thinking that he hadn’t made an impact.