Lazzarato's book argues that a change in the debtor / creditor relationship is key to understanding inequality in the West.

Maurizio Lazzarato is a philosopher of a leftist persuasion. That’s his excuse anyway for producing just a couple of books since exiling himself to France after Italy’s Autonomia was dismantled in the seventies.

In Governing by Debt the Italian ‘post-Marxist’ argues that the primary mechanism of the West’s economy is the creditor-debtor relationship. He believes most Marxist thought has shipwrecked itself by erecting opposition to earlier forms of capitalism, meanwhile ignoring the present picture. 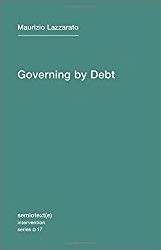 One might forgive the left for shying away from the picture he paints—it’s not a pretty one. Lazzarato touches on the primacy of rent, the growing inequality in employer-employee relations, an increasing discrepancy in property ownership and the suspension of political participation as identities dissolve.

At the heart of it all is a man still in chains—fetters of debt, Lazzarato argues. Taking up Gilles Deleuze’s remark that ‘Man is no longer a man confined but a man in debt’ as a call to arms, he dissects the creditor- debtor relationship to the nth degree, often leaning on a range of sociological phrases such as ‘capitalist valorisation’ and ‘techniques of governance’, employing a strange structure in which the start of each paragraph doubles as subheading. What emerges is a book that reads less like a dry, systematic, exposition, however, than a blustery manifesto. This is a shame because the idea at its core is strong and bears scrutiny.

Debt, Lazzarato explains, closes off time, mortgages its indeterminacy, and takes out an advance on our futures. It enmeshes everybody in its network and interiorises power relations, damning everybody with the financial equivalent of original sin. To which the reader is bound to note—has it not ever been thus?

Now the Italian intellectual insists it’s different. This is because we are stuck in an attitude that treats the world as neutrally assembled whereas historically we appreciated the asymmetrical relationship between Debt damns everybody with the
financial equivalent of original sincreditor and debtor and understood how power dictated political status quo. This influenced our behaviour towards debt and therefore our relationship to power. Now, however, we see the market as a neutral arbiter and view the risks of debt as dispersed and of little consequence.

Don’t put the cart before the horse, Lazzarato warns: ‘Automatic [operations are] always the result of a political victory over conduct’. In short, people presume we have reached a state of neutrality in the political sphere: its apogee can be seen as the reduction of politics to administration. In actual fact this is not the banishment of politics at all, merely the total victory of one way of looking at politics and the world..

Both the smallest unit (people) and the largest (nations) must humble themselves to its caprice. Credit flows dictate all. The nation-state can no longer pretend to be super partes in disputes as it has been reduced to a tool of convenience for capital, to be disposed of at will. The shift to this position was made explicit first, when Merkel announced during the financial crisis that Germany was a ‘democracy in conformity with the markets’ and, second, when southern European nations failed to cope with the reforms capital reckoned necessary and it was society, not the demands placed on it, that was deemed expendable.

Closer to the ground, just as advertising used to try to make you buy something, but now is placed everywhere so as to immerse itself in the customer’s world, so does debt no longer seeks total reimbursement and a return to equality between parties but prefers to enmesh everybody in a web of asymmetric relationships as a ‘technique’ of governance.

‘So what?’ May still be the general reader’s response and Lazzarato pre-empts it by raising a forefinger to debt no longer seeks total
reimbursement and a return to
equality between partiesthe direction in which capital is heading. Highlighting the capital has no values as such but seeks only value, he is certain this is where infinity enters the system and gives capital its most disturbing characteristics: not only treating the earth, matter and living things as objects but utterly incapable, as infinity is by its very definition, of reaching a state of equilibrium.

By the end of the book I understand why the subheadings are there. Lazzarato not only approves of Nietzsche’s thought; for better and for worse, he apes his aphoristic style. This means there are moments of brilliance but, like the stars in the sky, there’s little holding them all together—just huge, bewildering spans of space. Perhaps this is the price of being a pioneer in the field. I certainly hope another thinker will take up the mantle and, like an astronomer, link some of the dots.