HomeHistory as Chaos: Reviewing The Favourite and Vice

History as Chaos: Reviewing The Favourite and Vice

Oscar-nominated films involving history aren't usually famed for their verisimilitude. The King’s Speech (2010) was an enjoyable picture which took understandable liberties in extrapolating the drama of George VI’s speech impediment. Last year’s Darkest Hour (2017) entered the realm of magical realism when Winston Churchill decided to conduct a plebiscite on Britain’s maintenance of war with Germany on the London underground, a scene which may have been intended as some sort of comical allusion to Brexit. There are two films currently on release with multiple Oscar nominations, however, which I think display foibles which go beyond mildly forgivable displays of silliness.

The Favourite is set at the court of Queen Anne in 1708. Little attention is dwelt on the foreign and domestic context of her reign – she is merely a curmudgeonly eccentric who engages in whimsical activities like duck racing and playing with her seventeen rabbits. These ostentatious displays are, however, mere sideshows from the focal drama of Yorgos Lanthimos' picture, the love triangle between Queen Anne, confidante Sarah Churchill and Sarah’s impoverished cousin Sarah Hill. I say drama, but much of the scenes of sexual consummation, which hyperbolise and sensualise affectionate letters sent by Anne to Churchill and later Hill, are played for laughs, engendering a bawdy and off-kilter sensibility.

The critics have loved this, praising its caprice and wild, wavering tone. I, however, tired of the insouciant way the film discarded contemporaneous events, although I appreciate that The Favourite isn't targeted at those interested in gravitas and historical veracity. Yet it generally felt like a trivialising experience, even if one appreciates the efforts of a varied and eclectic cast which includes Emma Stone and Nicholas Hoult. The raucous laughter in the independent cinema I viewed it in only reinforced my anhedonia, a dislocation compounded when I remembered my liking for Lanthimos' last film, the macabre and spine chilling The Killing of a Sacred Deer (2017). If someone could explain a grand intellectual and moral point to The Favourite, I would really appreciate it. 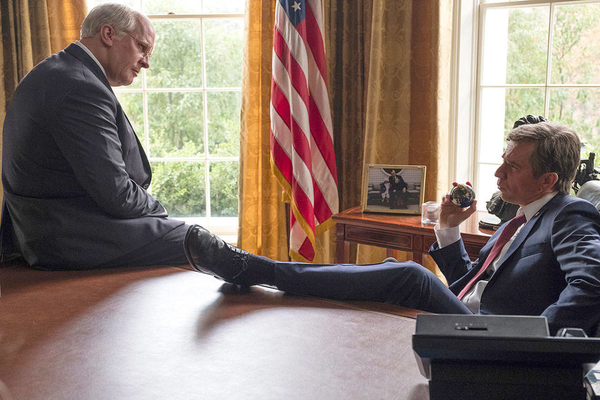 I had a slightly different problem coming out of Vice. The film is purported as a Dick Cheney biopic, exploring and deconstructing the psyche of a man repeatedly claimed to have championed a 'unitary executive theory'. Vice develops this idea in a somewhat scattershot way. The film flashes back to Dick Cheney’s youth as a ne'er-do-well in rural Wyoming before jumping to his rapid ascent during the Nixon and Ford administrations, a rise which culminated with an appointment to Chief of Staff in 1975. Throughout these scenes, Cheney alternates between assiduous bureaucrat and tough-minded partisan, sabotaging the efforts of realist Kissinger and idealising what can only be described as a renewal of Arthur Schlesinger’s much cited 'imperial presidency'.

I have issues with the imperial presidency, or as the film so intellectualises, the 'unitary executive theory', being portrayed as the preserve of Republican administrations. Surely Lyndon Johnson’s conduct of the Vietnam War, given carte blanche and extended sanction by a willing Democratic Congress in the form of the 1964 Gulf of Tonkin resolution, emblematised this thesis? Nevertheless, the film runs with this idea, eventually arriving in the febrile post-9/11 years, where Dick’s plans finally achieve their apotheosis in the form of the Iraq War. It is here where I found Vice most tiresome. Director Adam McKay shifts manically from George W. Bush’s economic policies (which are encouraged and promoted by Cheney) to the machinations beyond the Iraq War, revealed in the Department of Defense’s formation of the Office of Special Plans. I myself understood most of these esoteric references, having researched the build-up to the Iraq War, but I doubt the salience of these events struck fellow audience members, who I guess instead perceived a kind of mishmash of militarism and economic populism familiar to European critics of US foreign and domestic policy.

This isn't intended as a fulsome intellectual analysis, but rather some musings on how the Hollywood insistence on imposing overt political messaging into recent history-based cinema has left me cold. If liberal film producers want to outfox conservative criticism of Hollywood partisanship, they have to deliver more considered fare than Vice. Meanwhile The Favourite struggles for me to deliver as a film, instead feeling like a solipsistic exercise in historical extrapolation, and while obviously not part of the same US-focussed front in the culture war as Vice, the sexing-up seemingly required to gain favourable media coverage (and mission accomplished there) is dialled up to encompass the most rock 'n' roll historical inferences possible. In this way the sapphic and feminist tale we're given in The Favourite is directed entirely toward confirming modern attitudes, all while purporting to show us history. Even without the bombast of comic book movies, which may receive awards recognition if Black Panther wins best picture (and will also have done so entirely for its status as a cultural-political phenomenon, rather than for any excellence as a motion picture), my time in the cinema these days, whether for popcorn escapism or ostensibly historical reenactment, mainly attests to tales of sound and fury, signifying nothing beyond the political predispositions of the filmmakers.

Chief Film Critic of Excvbitor. He draws the line at Marvel films though, seeing them as one of the most infantilising forces in the west.