HOW THE FRENCH THINK

This latest volume from Sudhir Hazareesingh, a Fellow at Balliol and author of, amongst other things, several widely admired works on Napoleon, boasts a simple ‘does what it says on the tin’ title (How The French Think: An Affectionate Portrait of an Intellectual People; Allen Lane, June 2015). Mapping out the distinctive “cosmology” of French thought, he starts with some reasonable theories as to Gallic traits. These include a yearning for universality and redemption, a tendency to collapse problems into abstract notions, an inclination to cherish the state as an agent of reason, and an allergy to the Anglo-Saxon notion that knowledge is cumulative—to the French “the great speculative structures are made to be broken” 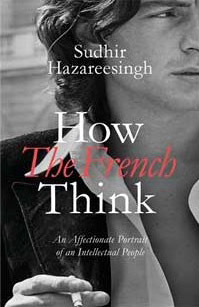 The list is a bit hit and miss. Hazareesingh is on rocky ground when he claims the French uniquely value first the weight of the written word; second, the past as a tool of legitimation; and third, imagination and order (with their mascots Rousseau and Descartes). No comparisons are provided to justify these claims (the closest we get is a handful of references to the British), which at best can be considered frivolous and forced, and at worst plain wrong. Instead, Hazareesingh uses Quentin Skinner’s famous observation that though concepts are usually understood within their broader intellectual frameworks, they are often also deployed as tools for particular purposes, in this case to justify a whirlwind tour of the history of French thought from Descartes to the present day. This, he promises in an odd addendum, will make us understand why the contemporary French are so underwhelming and pessimistic when compared to their illustrious forebears.

The result has a textbook feel. A long stream of examples follows in which the French reach several intellectual conclusions before anybody else. Each chapter addresses serious themes, from the occult to trends of philosophy, from swings in science to shifts in historiography, but the overlaps in chronology are so overwhelming that repetition strains the attention span, and there are so many quotations, often in places where the author’s pen could have provided an easy paraphrase, that it can read like a smashed jigsaw. This awkwardness is compounded by a smattering of French phrases that are hardly untranslatable. Saying "rosy tomorrow” or a “future that will make you sing” may not win you praise at the high table but it’s better, for the general reader, than bandying about phrases such as des lendemains qui chantet.

There are baubles to be plucked for those with the patience. The chapter on the occult is brilliant. I had no clue that around 10 million French men and women consulted an astrologer every year or that several presidents (including De Gaulle and Mitterand) let government policy be directly affected by the recommendations of their personal astrologers. Hazareesingh is particularly strong on counter-intuitional points too. His observation that France was obsessed with natural sciences to the exclusion of “feudal” speculative science at the time Burke reproved the nation for metaphysical indulgence is inspired. Another pot-shot at those who use Frantz Fanon as ammunition in identity politics is equally devastating. This is a man, Hazareesingh reminds us, who

“...vigorously opposed a folkloric and essentialised conception of black culture, was wary of the appropriation of nationalism by bourgeois elites and was especially contemptuous of
communitarianism and all forms of political tribalism.”

These sparks fly only intermittently, however. And as the book draws to a close, a series of hard-hitting theories on both French and European decline are dismissed with sneers rather than evidence. He cites There are bubbles to be plucked for
those with the patience. The chapter
on the occult is brilliantthinkers who see “cultural difference” delegitimizing the intellectual qualities that had historically liberated modern man, who note that society is churning out individuals without history, without attachments, prepackaged to serve as docile minions of global capital, who observe that sham egalitarianism, dissonance and newspeak are creating an unbridgeable gap between social elites and the decerebrated underclass, and who suggest that factions within the Muslim population may be harbouring values that are alien to the nation’s culture, but he is happy to shrug these concerns off with an ugly switch in tone, an insistence that polls show that individuals are happy, and an assertion that the winners of globalisation arc better people than the losers.

This leaves a rather nasty taste in the mouth. Indeed, instead of sympathy with the enlightened Hazareesingh, the sourness of his approach to those who suffer the consequences of liberal utopianism inspires the opposite response.