JS: No it’s been terribly cushy.

JS: I suppose I was in academia for long enough before law for people to assume my pupillage was just me having a lark. I was written off as a dilettante.

HHP: You’ve been compared to Gibbon in reviews I’ve read.

JS: As much as I love Gibbon, if anybody wrote like him today they’d be dismissed as a pompous fart.

HHP: Are you a bit more of a Runciman...

JS: He was a stylist to his core but he was also a Whig, I’m not a Whig. He could also be terribly condescending. I remember being at a talk he was giving on how the Byzantines influenced the Renaissance, an American piped up at the end and asked how the Byzantines must have felt like such a superior species when they were handling the Italians—‘rather, I might imagine, how I might feel if I were in America,’ Runciman replied. That said, he was a phenomenal linguist.

HHP: You’re not too shabby yourself on that front, are you?

JS: I can think in French, and can read and write most European languages, though Magyar escapes me. I rarely learned them using guides, instead I preferred to muddle on through a text with a dictionary by my side.

HHP: What’s the correct balance to be struck between action and reflection?

JS: My passions are bookish but I will say this: to write history you must possess a certain amount of empathy for people who had to ride in full suits of armour but you don’t need to wear one.

HHP: Why did England feel able to take on France, a country many times richer, with three times its population?

JS: Because France was weak at the time. It began to collapse as Charles VI sank into madness. It was a country far more reliant on its monarchy than its neighbours, mainly due to the fact it was a very complex To write history you must possess a
certain amount of empathy for people
who had a ride in full suits of
armour but you don’t need to wear
onepolity with several legal systems and languages. The scale of it is unimaginable, perhaps its closest comparison is 1940. The English certainly weren’t fools. If the Dauphin had died and/or Henry V hadn’t, an English victory would have been plausible. The unity we see today didn’t come until the sixteenth century and wasn’t cemented until the building of the railways in the nineteenth.

HHP: Are there any lessons in the Hundred Years’ War for today?

JS: Not really, other than in the sense all history is the attempt to achieve experience vicariously. I don’t like platitudes such as ‘we learn that war is futile’. No, war and religion both stand behind all the major tests humanity has undergone when addressing the biggest questions we can. The subtleties of warfare are being lost...

HHP: What do you mean?

JS: I’m reminded of a famous exchange between a German being interrogated by a British officer in 1944. The officer remarked that the Germans are a ‘warlike people.’ The German corrected him, saying ‘No. We are a military people, the British are a warlike people.’ Meaning the Germans were superb at the cold business of killing people but not the mentality, the organisation that sat behind it, whereas the British were adequate at fighting but marshalled every resource and trained every sinew of its society to war.

HHP: Your text is peppered with stats and facts, from taxes to maps—were your sources hard work?

JS: Perhaps before the fifteenth century. Afterwards, however, there are many more personal letters. As the sophistication of civil services grow, there are very impressive, neutral and complex appraisals of delicate political circumstances.

HHP: Have you read larger, abstract works of history, A. J. Toynbee’s A Study of History, for instance?

JS: I started to read that in the 1970s when it was still regarded as monumental.

JS: Yes, but at least Spengler had the virtue of being brief. I think what both miss is that declinism can only be a short term phenomenon. In terms of power and wealth everything’s going up and down all the time— and it’s not doing so within a framework of biology. It’s pretentiousness in the extreme. I liked Hugh Trevor-Roper’s demolition job of Toynbee. OK it’s catty, tart and trivial in places but for the most part it’s profound. I share with him the notion that any theory purporting to explain very much is bound to be wrong. Theories can explain small things but when they are scaled up they fray at the edges. Remember, the whole world can’t be in decline all the time.

HHP: Can I tempt you on to any political topics?

JS: I enjoy politics. It’s the subject matter or an important background to all historical matters. We live in an age in which we pretend to despise politics and politicians. I don’t. I think we expect things of politicians that aren’t necessarily political virtues, such as consistency. Not only in the sense of Keynes’ dictum about changing his mind when the facts change but in the sense that politicians have to keep up with the fact that our political appetites are always changing. 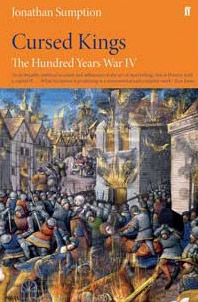 HHP: We live in a time that follows the disposal of the canon of dead, white men, and yet instead of heterogeneity, new orthodoxies have emerged...

JS: I despise straightjackets of all sorts. There should never be a concrete idea of history. Anybody with a fixed idea about these things is not reading a source but ploughing it for themselves. It’s dishonest, and There should never be a concrete idea
of historymore importantly, you’ll miss what’s there. Also, having a fixed idea of things destroys curiosity. On a similar note, the historical curriculum is appallingly narrow. It’s terribly damaging to study 1918-45, a period that tells you very little about the development of Europe and which is, in general, very untypical. The result is that most English schoolchildren are being taught about Germany and Europe during its most aberrant period. They are not taught that in George Eliot’s time France was simply a place you went through to get to Germany.

HHP: Is this part of a larger gripe?

JS: Perhaps. Yes, it feeds into a creeping conformism. No opinion should be unacceptable, especially if it’s wrong.

HHP: Your style is clipped and polished. Any tips for budding historians?

JS: Keep your style free of clichés. When somebody starts one of your sentences you should be damned sure that they don’t know how it’ll end.

HHP: If you were young again and off on a Grand Tour which you could design, where would you go?

JS: ROME because it’s inexhaustible, profound and sits at the heart of Europe. Apart from that hideous wedding cake (the Vittoriano) of course. Rome has forced into Europe new ways of thinking in spite of itself.

OXFORD because it’s a city that evokes something bigger than itself. It might tell you more about England than Europe, but the country is an important part of the continent in spite of its insularity. Don’t forget the French are just as insular, it’s just they’re better at spreading their insularity to the rest of Europe.

CONSTANTINOPLE—The new Rome, the second Rome. One of the tragedies of modern Turkey is the deliberate attempt to narrow the scope of its own culture; not just Erdogan, Ataturk too. The Greeks have been complicit in this. It was their fault for 1919-22. A chapter of history in which the Brits played their part when Lloyd George egged Venizelos on.