My grandfather used to read a couple of pages from the Oxford English Dictionary every day throughout his retirement, telling anyone who asked why that 'you should never let the sun set on a day when you haven't learnt anything new'. Born into that pre-1944 Education Act society, he had compensated for his rudimentary schooling by joining the Royal Navy which, he said, had taught him all about the world as he was given the opportunity to study through observation, and he would regale me with stories of the people he had met and their different ways.

I long for that carefree attitude, as the more I know the more I realise I don't know. Occasionally something comes along that helps illuminate some of the dark patches of the world, and this book is one of them.

I am a humble Byzantinist, one who recognises that the way the Empire twisted and turned over 1,100 years forces either a degree of generalisation or overspecialisation on the subjects within it. But outside the Empire? I know a few Byzantinists who understand adequately what twists and turns Islam took in its long journey after Mohammed's followers erupted from Arabia and supplanted the Persian Sassanid Empire and most of Byzantium's heartlands. But, for the average person, Islam is a monolithic bloc whose evolution and poorly lit paths and byways remain a mystery, especially in the central 10th century when the Sunni-Shia split became formalised.

To the average layman there may be a vague awareness of the two main strands of Islamic thought, but current views of Middle Eastern history still often present what renowned historian Richard Bulliet called 'the view from the centre':

'The view from the center portrays Islamic history as an outgrowth from a single nucleus, a spreading inkblot labelled "the caliphate" […which], in seeking to explain the apparent homogeneity of Islamic society in later centuries, itself something of an illusion, projects back into the days of the caliphate a false aura of uniformity, leaving untold the complex and strife-ridden tale of how Islamic society actually developed.'

Dr Christine Baker's book focuses on the critical years of the 10th and 11th centuries when (in simplistic terms) the tensions between Arabic and Persian Islam became too much and much of what defines Sunni Islam became formalised.

But how was that orthodoxy defined? In the Christian world religious power had become centralised at this stage in its development, and popes and patriarchs defined what constituted it, the monastic orders in the West testing the limits of what was permissible and unregulated popular movements being crushed as they usually are.

'I want to try and discuss the complexity of the period in a way that is approachable for non-specialists' is the premise underpinning this slim book.

The power, authority and legitimacy of Islam was never questioned during the Rashidun Caliphates; its adherents were too busy expanding its dominions, but consolidation brings introspection and uniformity, so who were the creators of orthodoxy? Religious scholars of the period had problems collating and disseminating ideas from a previously oral tradition; the institutions of the state became responsible for sanctioning the training of scholars to curb the itinerant preachers. The caliphate became viewed as the arbiter of orthodoxy as they were viewed as the paradigm of virtue – at least in expectation. But the real drivers of orthodoxy, as ever, are the arrivistes, who fix expectations as they try to fit in. Saladin and the Turks, as outsiders assuming power within the Ummah, hastened the split with the Shia. Part of my mind kept trying to draw parallels with American nonconformity and their Evangelical community.

There is a good chapter on the different Islams before the 10th century and proto-Shi'ism, with definitions of the Imamate, Zayidi, Ismai'ili and Twelver beliefs, and though you don’t have to have read any Crone, I personally found it helped. Shia thought appeared to have become settled by the 10th century especially in its tendency towards exegesis, throwing up movements like Khariji'ism (which in its ideological purity made me think of the People’s Front of Judaea versus the Judaean People’s Front), Khurramism and its link to Mazdakism, with the Persianisation of 'their' Islam and rejection of Arabism.

North African Shi'ism, which started as more of a millenarian cult than a caliphate, became as much a statement of political defiance as a doctrinal one to the Abbasid court. The Fatimids (named for Mohammed's daughter) took over control of much of Islam's western territories, their attacks and pamphleteering against Abbasid proxies akin to 17th century puritan Protestantism, but these helped reinforce that split between the two branches. The Fatimid Manichaean Muslim view of history since the Conquest allowed them to place their own struggle within the context of that original Islamic expansion. (I did smile at the description of the Sufi who have always hovered on the edges of Moslem acceptance as little more than heretical magicians.)

But to me it keeps coming back to the differing Arab and Persian views: the Buyids as an example, were unsophisticated North Iranians, outsiders (again) who carved out emirates within the Islamic east. They adopted those Persian ideas that keep bubbling through Islamic history like a well until the sectarian split effectively quarantined them. The Buyids bypassed caliphal legitimacy (as non-arabs they couldn’t aspire to it), but by claiming descent from the Sassanid Shahs they set themselves up as a counterpoint, emphasising again that separation and distinctiveness which the Arabs had always felt uncomfortable with about Persians and their landscape, physical and mental, which was reflected in their views and treatment, reinforcing the second-class status which provoked this reaction (I would recommend Crone for further detail).

On the other side of the ideological fence, the coming of the Seljuks and the Ayyubids also helped define the legitimacy of all through the defining of what constituted Sunni orthodoxy; the khutba became ritualised, shaping and conforming to audience expectations. The Shi'i became increasingly regarded as unorthodox because 'they were mixing pre-Islamic "old oriental" ideas with Islam'.

So what did this non-specialist make of Dr Baker's claim of approachability? He would not only agree with it, but recommend it.

She concludes the book with this apt summary:

'(The) contemporary conflicts are not a result of an endless hatred between Sunnis and Shi'is but caused by complex social, economic and political forces.
As a historian, I would ague against ever trying to draw a straight line between events in the ninth and tenth centuries to explain events in the Middle East today.' 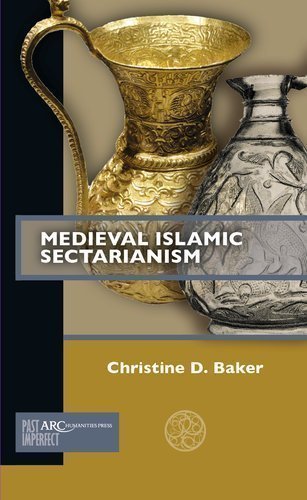