Thomas Cobb reviews Quentin Tarantino's Once Upon a Time in Hollywood, examining its themes, subtexts and place within the controversial director's canon

Once Upon a Time In Hollywood, a film which has attracted effusive praise from critics and fans of Tarantino alike, is perhaps one of the most politically slippery films of the year. Although its trailer markets it as a mercurial take on the US counterculture and the 'New Hollywood' of the late 1960s, Tarantino's film is more interpretable as a cinematic inflection point, foregrounding how the Manson murders wrought permanent damage on American culture and society. As I'll explore in detail, the film's anti-countercultural stance does nothing to nullify its seedier and nastier elements, which use bombast and transgression to appeal to a wide range of viewers. Please be warned, there will be spoilers and descriptions of graphic violence. 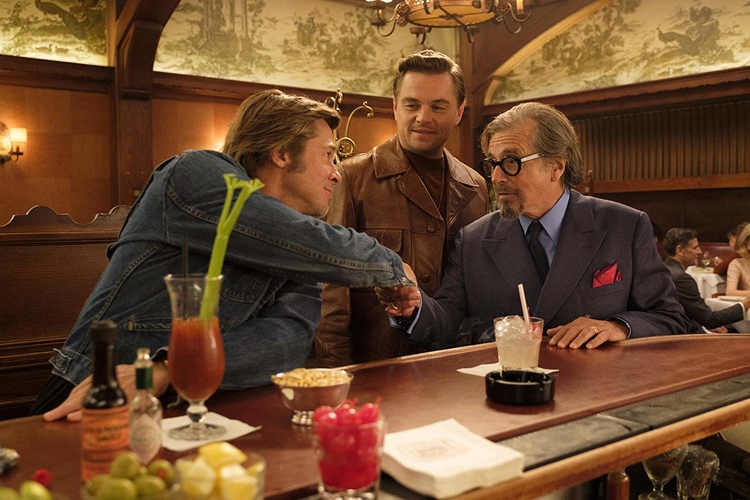 Tarantino's ninth feature film is set in the Los Angeles of 1969, a hub of hedonism and countercultural dissension. The central characters, aging Western television star Rick Dalton (Leonardo DiCaprio) and laconic out of work stuntman Cliff Booth (Brad Pitt), are struggling to feel culturally and professionally relevant. An early scene where Dalton is cuttingly told by casting agent Martin Schwarz (Al Pacino) that he should make Spaghetti Westerns initiates a meandering plot, largely consisting of Dalton and Booth’s daily routines in the City of Angels. An important sideline of the narrative, however, focalises Dalton's next door neighbour Sharon Tate (incarnated in this picture by Margot Robbie), the actress and wife of Roman Polanski who was murdered while pregnant in the summer of 1969. In spite of this inescapable reminder of tragedy, Tarantino's film is largely exuberant and rambunctious. From an altercation with Bruce Lee on a film set to the gaudy mise en scene of the bars Dalton and Booth drink in, Once Upon a Time in Hollywood screams 'zeitgeist' in a way that lovers of Americana and unreconstructed baby boomers will adore.

Yet there are numerous issues with the film's tongue in cheek representation of a time which is now (shockingly) half a century ago. A scene at the Playboy Mansion, where Tate and Polanski occupy the centre of attention, contains speculation about the latter's potential foibles, a portent of evil elsewhere unexplored amidst dialogue which praises the director's talent and celebrity. Fanboyish adulation of Polanski, a man who drugged and raped a thirteen year old girl, is as dubious as Meryl Streep's hypocritical applause for the disgraced filmmaker at the 2003 Academy Awards. One perceptible counteraction of this blasé depiction is the vitriol directed against the Manson family. A chilling visit to the Spahn Ranch in the film’s second act sees the stuntman Cliff Booth break the nose of real life family member Clem Grogan, a high school dropout and convicted murderer.

To give some context, the Manson murders illuminated what might best be described as a 'cannibalisation' of the counterculture, a process replicated elsewhere in the American 1960s (such as the anti-war riots that vitiated LBJ's ambition to achieve what FDR's New Deal couldn't). The murder of Sharon Tate sharply juxtaposed the most nihilistic facet of countercultural America with the accepted, privileged mores of Hollywood liberalism. Such sickly barbarity, however, doesn’t make necessary the unadulterated violence of Grogan’s beating or the lurid excesses of the film's climax (spoilers follow).

The latter segment presents a rewriting of history symptomatic of the revenge fantasies central to Inglorious Basterds (2009) and Django Unchained (2012). In the Hollywood Hills, a drunk Dalton emerges from his house to discover Manson family members parked in the area, preparing to murder everyone in the Tate household. His presence instead inspires the psychotic hippies to enter Dalton's house and kill everyone there, a plan nonsensically rationalised as an emulation of the actor's use of violence onscreen. In a shocking turn of events, they instead confront Booth on an acid trip and a very savage American pit bull. Real life murderer Tex Watson has his genitals mutilated by the pooch while Booth savagely beats the twenty-one year old Susan Atkins to the point of bloodied disfigurement. The outrageousness of this sequence peaks when the distraught Atkins lands in a swimming pool with Dalton, galvanising the Western star to action. Grabbing a flamethrower used as a prop in a film where he killed 'Nazi bastards', Dalton burns and incinerates Atkins, an act of savagery undoubtedly worthy of an eighteen certificate.

This set piece attracted nervous laughter in the screen I was in. But more audacity emerges in the epilogue which follows. After a wounded Booth is taken off to hospital, Dalton is asked if he wants to join a pregnant Tate and her houseguests for drinks. The film ends with an imagined fantasy of what might have been, somehow managing to be poignant, offensive and delirious all at the same time.

To defenders of Tarantino's movie (such as BBC Radio 5 Live's Robbie Collin), the melancholia and subverted dramatic irony of this finale attests to a film at a crossroads between the staidness of a bygone postwar era (possibly late Eisenhower/early Kennedy) and the tumult of the late 1960s. Dalton, who had his career peak in the 1950s, reinforces a stoical American masculinity out of vogue in the freewheeling Los Angeles of his middle age.

This incongruity possibly mirrors Hollywood's own slowness in coming to terms with the counterculture. In 1965, the year when Johnson deployed American troops to Vietnam, mainstream studios were still prioritising fare such as The Sound of Music and remained less interested in depicting the domestic unrest unfolding on college campuses and in urban centres. The advent of 'New Hollywood', a period dominated by young and rebellious filmmaking upstarts, arguably didn’t take hold until 1967 with the releases of Bonnie and Clyde and The Graduate. Tate’s murder occurred in the same summer that saw the distribution of the fatalistic Easy Rider (1969), an offbeat but turgid road movie consumed with countercultural disillusionment.

The interplay between two different Hollywoods is the ultimate 'triangulation' (to borrow a well-known Clintonism) of Tarantino's film, cementing a longing for connection between disparate cultural and political generations. In a strange scene on the set of a Western TV serial, Dalton is moved by a child star who educates him on the importance of referring to women in the correct way, a perverse overture to the feminist movements of the early 1970s. The ending, where there are implications that Dalton's flagging career is going to be boosted by his socialising with Tate, further hints at this vein of intergenerational rapprochement. Perhaps Tarantino is saying there was an opportunity for understanding forever foreclosed by Manson's killings, an event fantastically averted in his feature film.

Yet this conciliatory reading avoids acknowledgement of the seedier elements of Once Upon a Time in Hollywood. It is easy to purvey an agreeable message when your main objects of vituperation are the drug-addled denizens of the Manson family. The violence against women in the climax would be treated far more critically without the caveat that these are the same individuals involved in the murder of Tate. There is also the unfortunate intrusion of Tarantino’s foot fetish, a phenomenon long noticed by fans and critics alike. This appears in a more transgressive fashion when Booth decides to drive a hippy woman (named 'Pussycat') to the notorious Spahn ranch. In this scene, an individual Booth fears is under eighteen offers to give him fellatio while he drives, adding a needlessly exploitative element to the proceedings. Perhaps this scene was intended as a pithy reflection that statutory rape just wasn’t taken as seriously back in the 1960s (Booth, fortunately, does take it seriously). Or perhaps, given the lengthy shots of Pussycat’s feet, it is less purposeful than that.

The Los Angeles of Once Upon a Time in Hollywood presents a sicklier rewriting of history than either the Nazi-occupied France of Inglorious Basterds or the American South of Django Unchained. Critics have championed Tarantino's latest feature as a return to form, melding both the LA settings of his early features (Reservoir Dogs, Pulp Fiction) with the grandiosity of his later work. It is instead a film which, in spite of much compensating visual and aural eclecticism, contains Tarantino's worst predilections for foot shots and unflinching bloodshed. Those looking for a truly revisionist take on the sins and errors of the 1960s should be forewarned that we are still waiting.

Chief Film Critic of Excvbitor. He draws the line at Marvel films though, seeing them as one of the most infantilising forces in the west.