So writes John Julius Norwich, describing the inane game of royal musical chairs that followed Sicily’s thirteenth-century heyday. If it’s an honest preface, it’s also a sad one. Striking a valedictory note, Norwich outlines a life which traced the footsteps of his father Duff Cooper (whose Diaries 1915-1951, incidentally, his son edited a decade ago) in the Foreign Office until he encountered Norman Sicily. He claims this epoch had such an impact on him that “There was nothing for it but to resign from the Foreign Service... I have not put [my pen] down since.” Now 85, Norwich reckons this book may be his last. 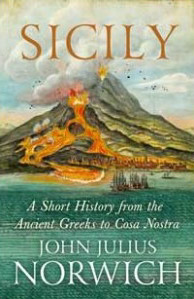 We must hope not. With almost 20 titles on the history of the most overlooked parts of the Mediterranean basin to his name, Norwich has consistently achieved a rare task: yoking the bright lights of academia to the demotic idiom of the people. His story also tangles with the area’s royalty, Patrick Leigh Fermor (‘Paddy’ to initiates); his daughter, Artemis, was the traveler’s friend and biographer.

I must declare an interest. It was on my own abbreviated journey in homage to Paddy (from Athens to Constantinople) many moons ago, that I swallowed the first volume of Norwich’s Byzantium: The Early Centuries whole. My walk up to that point had been a whimsical (and farcical) A-to- B affair, fulfilling the rather uninspiring virtues of first, saving money (I illegally camped everywhere); second, being somewhere hot; and third, perhaps most importantly, avoiding a girlfriend who was doing expensively fun things elsewhere.

Immediately I ordered 12 books to be delivered to a post office ahead of me in Paralia Katerini. The majority of them were by Norwich. What followed was an obsession I’ve never been able to surrender, a transfiguration I’ve struggled to reverse. Before, I had been a simple classicist, with the twin lamps of Athens and Rome iridescent, like headlights, in my eyes. Then, the mysteries of the New Rome began to haunt me, and still do. 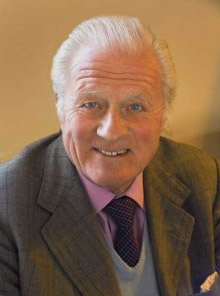 Artemis isn’t the only thing Norwich has in common with Fermor. This history is sprinkled with Fermor-esque trills, as when the author passes Stromboli (a volcanic island) and notes that it is “emitting a rich glow every half-minute or so like an ogre puffing on an immense cigar.” Or when a dynamiting footnote tells us that certain places are “deeply uncharismatic.” Or when delightfully dated words and phrases, such as “enfeoffed” or “cannot hold a candle to” are deployed.

The result is very smooth prose. Norwich hates histories that slap fact on fact but fail to establish the wood for the trees. Preferring to focus on the beautiful and the surprising, the attitude may earn him sniffy looks from academics but it also produces ice for eyes that would skate. Not that it feels effortless: one suspects that without his other daughter, Allegra, as copy-editor, some passages would blossom a little too purple.

The keynote struck here is that Sicily is a “sad island.” Apparently “every Sicilian” knows it. Perhaps this idea is lifted from Goethe, who talked a similar game when he observed its land “rests in melancholy fertility.” Admittedly it hangs better than most labels. Sicily is impervious to them. But its chief justification appears to rest on a rather tenuous Western formulation, namely that happiness is tied to sovereignty.

When the material is there in the first half of the book, the pace is astonishing. After the usual Norwich prologue, hilariously wafting aside talk of early history (“pre-history”) to those who care, we are treated to Norwich produces ice for eyes that
would skate a fusillade of facts. Sicilians replace the Italian final ‘o’ with a “u”, they have an immense respect for bread (boasting 72 sorts), Roger dc Hauteville’s Norman winery is still going, the cathedral of Syracuse was built five centuries before Christ, Agathocles was the first European to invade North Africa with a military force, Hieron II’s altar to Zeus stood at some 50 ft high, Constans II tried to transfer the Roman capital to Syracuse in 633, and it was a treacherous Byzantine by the name of Euphemius, who seems to have played a role similar to Julian of Ceuta in Spain—betraying the country to Arab invaders.

The facts are leavened with some brilliant anecdotes. The best is pinched from Diodorus Siculus on how Dionysius I, being an academic manque of the Claudius mould, used to impose his readings on the court. Philoxenus, unable to praise bad art, is sent to the quarries, “released, alas, just in time for another poetry reading.” This he suffered in silence until the despot asked again for his opinion. “‘Back to the quarries,’ he murmured.”

Perhaps the biggest surprise to those unversed in the subject is the scale of English involvement in Norman Sicily. With Abelard of Bath studying Islam there, an English Bishop of Syracuse (fl.1160), another Englishman signing himself ‘Emir and Archbishop,’ several Englishmen lining up to buy the Sicilian crown when Manfred was declared excommunicate, and English Saints glittering in Monreale’s cathedral gold, Norwich is right to point at a relative ignorance in our historiography.

Sicily: "there was nothing for it but to resigh
from the Foreign Service"

It all goes a bit pear-shaped, however, both in the history stakes and with the book, after what’s known as the ‘Sicilian Vespers’: a spontaneous mass rebellion against Charles of Anjou’s army in 1282—ultimately destined for Constantinople—which Norwich credits with giving Byzantium its last (200-year) lease of life.

The next half of the book verges on the boring and I suspect Norwich knows it. Some devices such as “the full story...is far too long and complicated to go into here,” should have been used more regularly. The long and short of it is less that trade routes change with Columbus and others (Venetian history still blooms) but that first, very little happens and, second, even when it does the main story is elsewhere, tied into greater sovereigns and their complex contexts. The narrative is strained as it jumps from Naples to Spain, from Austria to Nelson and the Hamiltons; the focus is lost. There are little slip-ups too. Norwich refers to the “famous red beards,” of the corsair Kheir- ed-Din Barbarossa and his brother, Aruj, when only the sibling had the ginger fuzz.

But throughout, at least, Norwich is truthful and frank. In the epilogue, he admits he’s “at a loss” as to why Sicily is so unhappy. This is, I suspect because it isn’t. The island has probably simply developed an acute sense of antiquity’s cycle, Islam’s fatalism or Ecclesiastes’ cynicism. Throughout its history, when Sicily wants something collectively it seems to get it; in general, however, it just prefers getting on with real life and letting others allow themselves the conceit of ‘rule.’

This misunderstanding of Sicily is at its most obvious when one turns to the mafia (“the honoured society”). A club most Westerners see as a suppurating sore, the complete alien logic of Sicily hits with Vittorio Emmanuele Orlando’s explanation:

“It’s a sense of honour pitched in the highest key: a refusal to tolerate anyone’s prominence or overbearing behaviour... A generosity of spirit, which, while it meets strength head-on, is indulgent to the weak and shows loyalty to friends.”

In other words, the kind of behaviour that is noble and yet primitive, a primeval order that can be frowned at from the heights of civilisation’s precipice, but will ultimately outlast it—much like Sicily.