Robert Crawford's account of the youth of T.S. Eliot is a worthy attempt to rescue the poet from those who would sculpt him into a monument.

Poets tend to occupy fixed images in the mind: Betjeman - bald; Larkin - bespectacled, Auden - craggy, Clare - ruddy, Housman - moustachioed. Many go deeper and represent an idée fixe or a period. And so the verse of Herbert, Donne, Kipling and Pound sum up spans of ages and spirits far greater than their lives. But of all the poets in recent history one is hard - pressed to find any one who has stamped his persona so hard on the wax of tradition as the venerable, po-faced and authoritative T. S. Eliot.

In this literary biography Young Eliot: From St Louis to the Wasteland (Jonathan Cape, 29th January 2015) Robert Crawford seeks to, if not upend this image, at least balance the broth and not only emphasise T. S. Eliot's youth, his development, his vulnerability and his mischievousness but also snatch back the poet's humanity from those who have sculpted him into a thinker, a monument, and a defensive shell of a man. The first hurdle is to strip T. S. of his austere initials and recover a Christian name: Tom. 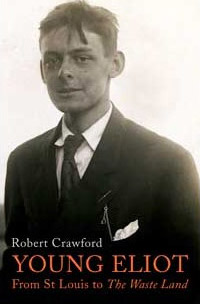 The book gets off to a bad start. Even the most avid T. S. Eliot fan will struggle with the tempo up to Chapter VII when Tom goes to Paris. Crawford complains that biographers have given Tom's childhood short shrift but few readers will feel short - changed after this account. The pace and tone of these early years are dutiful rather than joyful. And the pain isn't eased when the author devotes almost an entire page to a description of Tom's room at Harvard - a room remarkable only in its being indistinguishable from others of its time and place.

Once Crawford gets some meat to toy with, however, he proves an able carnivore. Perhaps that should read mortician, for this is a book of unrelenting pain, suffering and torturous self-consciousness. The Robert Crawford seeks to snatch back
the poet's humanity from those who
have sculpted him into a thinker, a
monument, and a defensive shell of a
man catalogue of misery makes for an exhausting read: health issues (congenital hernia, teeth falling apart, rheumatism to name a few), sensitivity about his jug ears and eagle nose, the deaths of his friend Verdenal (“mixed in the mud of Gallipoli”) and his father, his work duties (at schools, magazines and Lloyds Bank) that reduced him to “a machine”, his treatment by Bertrand Russell – who plays a cameo role as a duplicitous arse who sleeps with Tom's wife whilst giving him access to a literary elite, not to mention his wife, Vivien's, behavior – who seems to have suffered from depression and gave signs of hypochondria.

No wonder Tom gave up his parents' Unitarianism, dismissing it as "bad preparation for brass tacks like birth, copulation, death, hell, heaven and insanity." The two main drivers of the book stem from a rejection of first, the impasse poetry found itself in (after the sentimentality of Swinburne), and second, what he considered to be "the fallacy of progress." 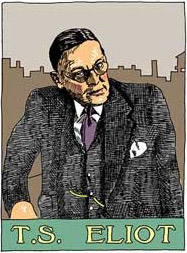 He sought escape from poetry's mire by re-contextualising Anglo - Saxon verse within a European framework. He functions as a sort of post-Reformational Alcuin, affirming, entangling, and involving Anglosphere learning within the West. Dante, Baudelaire and Laforgue earn their laurels as the pathfinders to this greater scaffold. At points even Buddhist thought imparts new forms on tired matter.

Fleeing from the platitudes of progress, Tom could sometimes veer into reactionary soundbites (his famous reactionary triad, "I am a classicist in literature, royalist in politics , and Anglo-Catholic in religion" was poached from a magazine interview with Charles Maurras) but his own conservatism was more reflective.

The soil of system [is] rich in contradictions. As the system decomposes, the doubts push through: and the decay is so general and fructifying that we are no longer sure enough of anything to draw the line between knowledge and ignorance.

The deepest theme of the book is no surprise: it is a writer's book. Tom's mission, his trials and tribulations, trying to get a lucky break on London's literary scene is in many ways an old tale. But rather The two main drivers of the book
stem from a rejection of first, the
impasse poetry found itself in (after
the sentimentality of Swinburne), and
second, what he considered to be “the
fallacy of progress.” than dull the barbs, it tends to bring them into ever sharper relief. Writers of any kind will find themselves nodding at Vivien's remark that “journalism is bad for Tom....it will be the ruin of his poetry.... he ought never to have to write.” Crawford enjoys poking fun at the pompousness of the Times Literary Supplement and the Quarterly Review whose reviews of Tom's early works makes a mockery of literary criticism's claim to any sort of prophetic status. Tom's own deliberation that he refuses to live like a tired writer

A tired man like other tired men who have to make a living by literature and also have consciences; tired men who want to make a book and cannot wholly allow themselves that luxury; and the tired men do make books - they cannot deny themselves - but the books are mutilated and unfinished.

Will have many a scrawler in full-time employment agreeing in their mind (lacking the energy to nod).

The book comes to a halt with the publication of the haunting The waste Land. A poem conceived by Tom in delirium (finished "in a trance" according to Virginia Woolf) and delivered by the editorial genius of Ezra Pound. Crawford tells us he hopes to publish a second volume, no doubt covering Ash Wednesday (1930) and Four Quartets (1943) -  I look forward to his coverage of Tom's last encounter with Vivien at a Sunday Times book festival. Let's hope it will capture as well as this book does, the oscillation of Tom between two poles: the effortful spin between the primal and the very highest culture. An attitude that The Waste Land almost uniquely captures; a combination wherein lied, according to Tom, the poet's true genius: